Of all the “soul-stirring” quotes etched into the lobby of the former Tribune Tower, Heidi Stevens’ favorite was from Arthur Miller: “A good newspaper, I suppose, is a nation talking to itself.”

Stevens, who has been a reporter and editor with the Tribune since 1998, will address state of that chatty union, among other topics, at the Northern Illinois Newspaper Association’s annual banquet on Thursday, Oct. 18, at Northern Illinois University.

“I’ll talk about what that quote means to me, after 22 years in the business, and why it feels more essential than ever that journalists foster and, in some cases, launch a dialogue in their communities and in the nation,” Stevens said.

“We need to serve as watchdogs and gatekeepers and eyes and ears and voices for our readers, but we also need to remind people how to talk to one another,” she said. “We need to tell people’s stories — the good, the bad, the tragic and the joyful. We need to listen, and we also need to lead.”

Describing herself on Twitter, Stevens writes: “Chicago Tribune columnist. CPS mom. Feminist. The one with the hair.”

Not sure what she means by “the one with the hair?” Perhaps she’ll touch on that during her keynote speech …

Stevens’ column “Balancing Act” covers a wide range of topics, from politics to motherhood, as she offers thoughtful and at times, humorous perspectives.

We’re extremely pleased and honored to have Stevens as our keynote speaker this year, as she’s sure to deliver a clever and delightful presentation.

The banquet also is the perfect opportunity to share in fellow journalists’ successes with the awards ceremony, as well as network with peers.

The banquet, which honors winners of NINA’s 2018 Newspaper Contest, begins at 5:30 p.m. in the Sky Room at the Holmes Student Center on the Northern Illinois University campus.

From bullied teen to Justin Bieber songwriter, Justin Tranter has arrived — and he’s bringing Chicago kids with him

Why does it matter if Bert and Ernie are gay? They teach the alphabet! And manners! (Hint: That’s why) 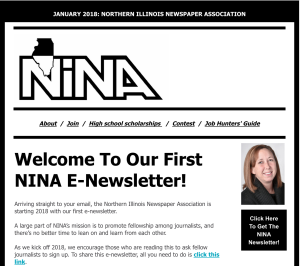